The Council of Albanian Ambassadors STATEMENT On the Constitutional Amendments in Macedonia.

The Council of Albanian Ambassadors( CAA) congratulates the Parliament of Macedonia on for the adoption of the new package of constitutional amendments which ensure the implementation of the Agreement with Greece.

The Republic of Macedonia has gone through a difficult transition from its independence in the early ’ 90 to date for building up democracy and its Euro-Atlantic integration.

Its good relations with neighbors, as well as its NATO and EU integration will be an added guarantee for the future of Macedonia and its own citizens.

The Council of Albanian Ambassadors does also show its appreciation for placing Albanian with the official language status.

The CAA commends specifically the essential role played by Albanian factor in the Parliament and beyond to ensure the democratic and western orientation and in overcoming the domestic difficulties that are a legacy of e problems faced in the full implementation of the Ohrid Agreement.

Macedonia is a reality of the multi-ethnic democracy within which Albanians represent a state building factor.

The decision taken  by the Parliament of Macedonia is an example and encouragement also for other factors in the region which face the need to reach reconciliatory, cooperation and integration accords. 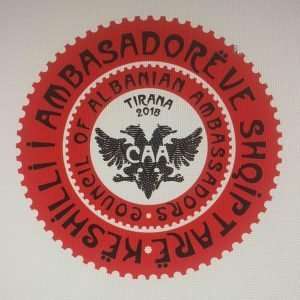